Q: MovieMaker: The video produced by the MovieMaker is jittery!
A:

Q: MovieMaker: I receive the message "cluster size error"?
A:

Cluster size error means that you are either using a very old SD card (1GB or less), you are using larger than 32GB card or you did not format the card using the Wolverine unit.

Q: My film cannot advance or the output is jittery
A:

1) Don’t start scanning from the white lead.  Start at least an inch into the film.

2) Move the switch for 8/super8 few times back and forth and then push it all the way to one side.

3) Make sure the film is under all three white tabs as shown in below image.

4) Try a different film to make sure it is not a film issue. 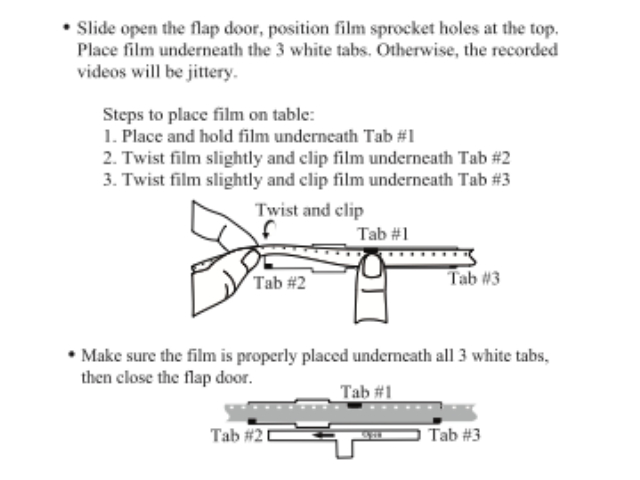 Q: MovieMaker - My film wont go through the MovieMaker?
A:

Q: What are the different settings for Sharpness and Exposure Values (EV)
A:

Q: MovieMaker - The whole video or some portions of my video are Jittery?
A:

A work around this issue is to wind the film to the empty reel and scan the film backwards. This way the unit will scan by grabbing on the good side of the sprocket holes then, using a video editing software you can reverse the playback and save the file playing forward.

Q: MovieMaker: How do I adjust the Frames?
A:

Please, check the video below:

If the Wolverine MovieMaker start acting erratic where it may start working right after you plug the power or no response from buttons then the sensor under the pin that pulls the film is clogged with dirt that came out of the film.

Please, use a compressed air can and blow air left and right of the pin as shown in below video.  Please, clean the film using a lint free cloth before scanning to minimize this issue.

Q: MovieMaker - My video is playing at 30 fps although my film was recorded at between 16-24fps.
A:

If you are using a Mac, you can use the pre-installed iMovie App.

Q: What is the best Video Editing Software for Windows
A:

Check the review below:

The unit came with a Micro-SD card. However, you need to insert the small Micro-SD card into its adapter and push all the way until it is flush with the edge of the adapter, before inserting the SD adapter into the Wolverine. Please, check the image below: 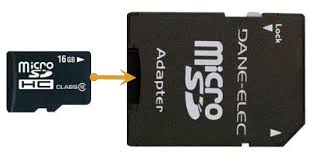 Q: F2D TITAN - How to Adjust Image Cropping?
A:

Unit in the OFF Position

Q: F2D TITAN / MIGHTY: I have European thick slides that measure about 3mm in thickness. How can I scan these slides using the Slide Adapter?
A:

We recommend that you adjust the Slide Adpater as discribed in the three pages PDF file link below:

Q: How Do I adjust Image or video date?
A: